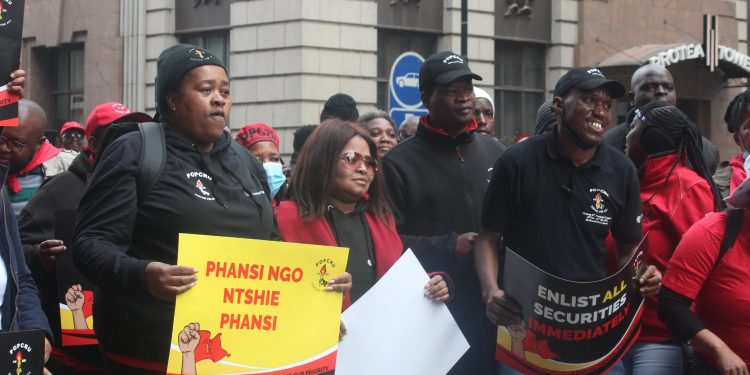 Trade union POPCRU has threatened industrial action if their salary increment demands are not met. The union says it will be marching to the Union Buildings and the treasury department in Pretoria on the 20th of September over salary increments.

Workers are demanding a 10% increment while the government is offering 2% including a grant of 1 thousand rands offer which they’ve rejected. The onion briefed the media on Sunday in Johannesburg.

A looming strike in the country’s criminal justice cluster that might lead to catastrophe if unabated. POPCRU says it is not backing down until government pays employees what they deserve.

The union which represents 150 thousand SAPS, Correctional Services and Traffic Services members says it is unhappy with what the government is offering.

General Secretary Jeff Dladla says, “The NEC resolved that in defending our hard-won gain, our members within the criminal justice cluster will embark on a march to the union buildings directly to the commander in chief, President Cyril Ramaphosa to demand that public servants be paid what Is owed to them. A better salary offers a baseline that is not less than 10%, to attend to all other agreements that are not implemented in the housing scheme for public servants. Treasury must reverse all austerity measures in the public service.”

The correctional services department is also said to be bleeding due to being under resourced with 39100 post establishments. Before 2009, it had 48 thousand trained correctional officials. Dladla says it’s concerning that the department currently has 39 thousand posts, with 26 thousand officials currently dealing with only inmates.

Dladla further adds that, “The officials currently dealing with inmates as of 30 June 2022 are 26287 and this is a cause for concern, and this means more altercation and deviation from the core function of rehabilitation. That is why we have seen a lot of evidence of attacks on our members in the country. Our members are butchered by offenders every day.”

Dladla adds that they’re also calling for the transport department to take over traffic functions.“The special NEC reiterated its call for the nationalization of traffic so that they can streamline the functions of all traffic fraternities to fall under the department of transport.”

The union has also called for an urgent crime summit to address the high levels of crime and address austerity measures. It says less than 100 police officers are on the ground and a lack of resources makes it almost impossible to fight crime.

“The work that we are doing is essential, at the same time you must be very careful when you are saying they are essential even if in the manner that you treat them you expect them to be essential. You must understand that if they are essential, you must treat them as such why don’t you give them what they want so that at the end of the day we don’t have a situation where they’ll be able to go out and flex their muscles. We are dealing with angry people,” said Dladla

As part of the build-up to the march, the union says it will embark on lunchtime pickets across all police stations, correctional centres, and traffic institutions.