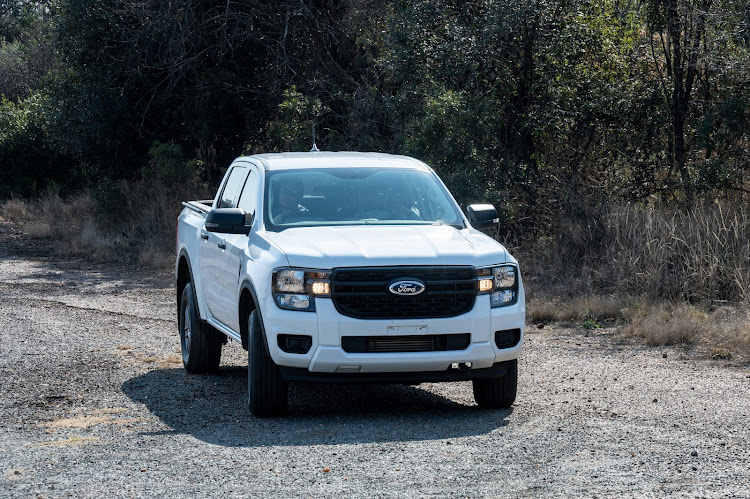 We had a chance to sample the latest bakkie, in addition to a quick peek behind the scenes at extensive upgrades made to its Silverton production facility. The company has invested hundreds of millions in preparation for the next-generation pickup.

Before you ask, the answer is yes, we did see examples of the related Volkswagen Amarok on the production line. Due to an agreement with the German brand, Ford’s representatives opted to stay tight-lipped when asked further questions regarding the other vehicle. No matter, as you would have read about it anyway after our attendance of a local preview session last month.

Let’s talk about the Ranger. Consider our interaction as a brief taste rather than an in-depth experience. We’ll provide that when the model launches officially before year’s end, at which time a lengthy ride and drive opportunity will be had. Though the dimensions of the new Ranger have increased, the vehicle appeared somewhat smaller viewed in the flesh. Attribute that to stylistic illusions that serve to belie its true proportions. The squared-off front end is suitably assertive, with its C-shaped headlamps joined by a bar spanning the width of the grille. Down the side, it has an even boxier impression than before, while the large, red rear lamps flank a tailgate with a sizeable Ford oval dead-on centre. 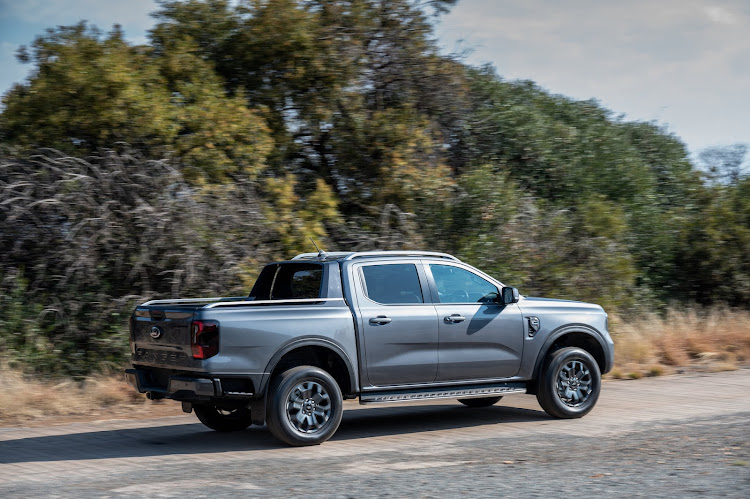 Our first encounter is with a close-to-base specification XL model, unpretentious about its purpose, wearing a basic white paintjob, tough plastic cladding and 16-inch rollers in a charcoal finish. Despite the omission of garnishes, it’s by no means an unattractive double cab. Opening the door reveals fabric interior upholstery, durable plastics (pleasant enough to touch) and a completely new cabin design that has little, if anything, in common with the outgoing vehicle. The current Ranger has a massive dashboard atop which one could set up a Scalextric track.

This redesigned fascia is more upright than before with a smaller top section, though it still offers plenty space to play with your Hot Wheels. What’s also nifty is even though the XL is lower on the grade ladder, you’ll still get a tablet-like infotainment screen, supplemented by a fully-digitised instrument cluster. Ergonomically, the Ranger feels even more car-like in execution than before. Some changes may take some getting used to, such as the interior door release handles, which are integrated into the armrests where elbows would sit.

Firing up the 2.0-litre, four-cylinder, single-turbocharged-diesel engine, it’s clear there’s extra in the way of sound deadening. Not that the present Ranger is a particularly noisy steed, but there’s no mistake this is appreciably quieter. That becomes even clearer as we nose the car through the mountainside-handling circuit. Clutch pedal travel seems to be shorter, with a low biting point, and the brakes require careful modulation because they’re quite sharp. I’m enjoying the action of the six-speed manual, with throws that simply don’t feel as bulky or cumbersome as is usually expected in a manual bakkie. 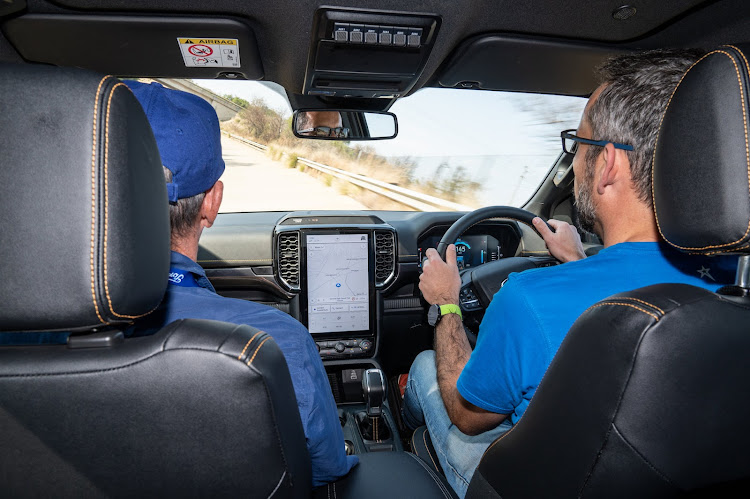 There’s a tangibly smoother layer to the overall operating quality. From steering, to suspension comfort, this Ranger’s definitely a new instrument. But the leap in specification is stark when we pore over the high-tier Wildtrak. You’ve got powerful LED headlamps instead of halogens, a more attractive alloy design, sidesteps, a frontal scuff plate and even an integrated step for the rear load bed. Opening the door reveals an environment easily described as luxurious. The upholstery looks much more sumptuous and durable than the leatherette combination found in the current Wildtrak. It’s a space of soft-touch, fine stitching and genuine quality. Buttocks planted comfortably into the driver’s seat, my fingers fail to fight the urge to press every button on the aircraft-like panel overhead. There are six of them and they’re not yet connected to anything. They’ll serve as toggle switches for accessories chosen by the buyer, including winches, among other pieces of equipment.

A larger infotainment system is noted, with a high-definition display and more comprehensive array of features, including wireless Android Auto and Apple Car Play. Like with the XL, it gets physical buttons and rotary dials for audio volume and climate control. Though a chunky gearshift lever sticks out in our automatic test vehicle, we’re told a smaller, niftier selector will be found in the production version. The shifter in this case is connected to the familiar 10-speed automatic, paired with the equally familiar 2.0-litre, four-cylinder, twin-turbocharged-diesel motor. 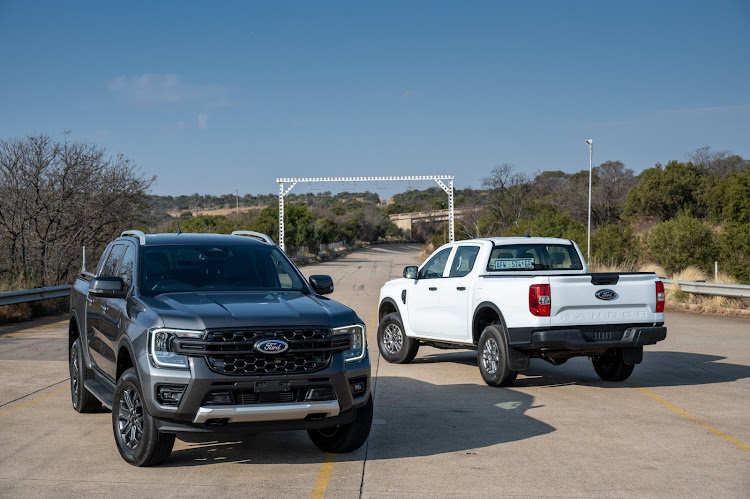 There’s an electronic parking brake as well, freeing space in the centre console, while the off-road settings are no longer controlled by a rotary dial. Powertrain refinement is apparent as we approach freeway speed on a section of our handling track. Bear in mind the surfacing of said track is not smooth asphalt but a coarse, cement-type variety designed to punish vehicles’ tyres and chassis. Yet the Ranger is taking it comfortably in stride and seemingly managing a good job of suppressing tyre roar. The transmission’s decisiveness was also noted. Drive a current Ranger or Everest with the 10-speed and you are likely to remark on that tendency to perpetually adjust ratios in the manner of a continuously-variable transmission (CVT). But that didn’t seem to be the case here, which evidences work had been done to quell this characteristic.

Sadly, there was no example of the enticing six-cylinder derivatives for us to taste. But they’ve got to save something for the main event, right? Of course, there was no indication of pricing, despite our best efforts to gauge a ballpark figure. The fact that it’s produced locally will work in the brand’s favour.

Whether you’re a paying double cab consumer or keen observer of the genre, it’s going to be interesting to see how the new Ranger story plays out, especially with the parallel existence of its Volkswagen-badged twin. It’s also going to be exciting to see the ripostes from direct rivals Toyota, Nissan and Isuzu. Based on this first taste, they’ve definitely got their work cut out.