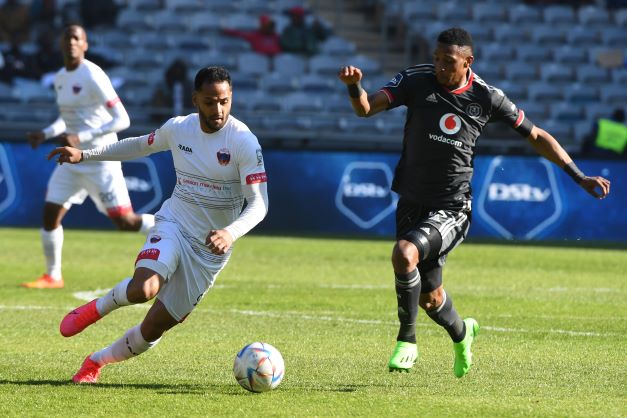 Chippa United registered their first win of the season when they defeated a wasteful Orlando Pirates 1-0 in a DStv Premiership match at Orlando Stadium in Soweto on Sunday.
Abdi Banda scored with just four minutes left on the clock to help his coach Daine Klate get off the mark while Pirates coach Jose Riveiro tasted defeat for the first time since arriving in SA.

Riveiro and his technical team seriously need to quickly come up with a solution on how they are going to solve the side’s big goalscoring problem.

The Soweto giants could have won the match with at least a three-goal margin if they were clinical upfront.
While the Chilli Boys were excellent in defence, Pirates could have done much better.

Even in their first match of the season against Swallows, Pirates created numerous chances but scored just one to win that match.

The two teams were desperate to bounce back after their failure to collect maximum points in their previous outings.
Before Sunday’s fixture, Pirates played a 1-1 draw with Stellenbosch FC while Chippa were hammered 3-1 by Royal AM.

Pirates had numerous chances in the opening half, but they couldn’t find the back of the net, thanks to excellent defending by Chippa players such as Justice Chabalala and Matome Mathiane.

Ghanaian forward Kwame Peprah had most of the opportunities in the first half, with his first real chance after 10 minutes of play with his header from a Thembinkosi Lorch cross.

After his indifferent start to the season, Chippa United mentor Daine Klate wants a better performance from his “new team” as he plans to change …
Pirates had another glorious opportunity eight minutes later when Thabiso Monyane sent a low cross into the box that found Deon Hotto, who was quickly closed down by Mathiane.

Peprah was replaced by Bienvenu Eva Nga who also had his chances in front of goal and failed to put them to good use.

When the match looked like it was headed for a draw, Banda scored with a beautiful header from a Janovane September corner kick.

Pirates will now travel to the tricky Royal on Wednesday while Klate will lead his men to Maritzburg United.